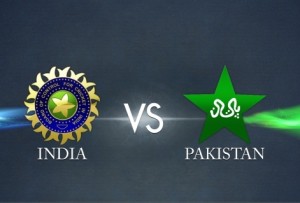 It’s not often that there is disharmony in the ranks at West Ilsley, but today started out with lighthearted banter, descended into minor bickering, before progressing on to vile threats and mindless violence.

That’s what cricket can do to men and women (let’s not be sexist) of a certain disposition.

As ever, The Trainer was the instigator of abrasive tendancies as first lot passed by the gallop wagon at the top of Hodcott Down.

When the string took another turn around the collecting ring The Trainer continued.

“Ere Ali!
“Yes Boss?”
“Gordhan says that Pakistan are useless and that Tendulkar is going to score a ton batting left handed. Oi Ahir! Maroof says that India are a pub team!”

It shouldn’t have been so.

There’s enough troubles in the world without revving up the rivalry between two cricketing superpowers. The World Cup Semi Final between India and Pakistan makes the England v Scotland Home Internationals of the 1970’s look like a knitting class with Thora Hird. 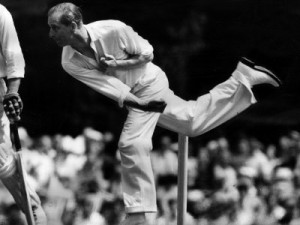 Having swung the willow in India myself, I’m well aware of the hotbed of cricketing passion. Indeed, I even challenged Gandhi to a game to sort out those “Independance Issues” that he had such a bee in his bonnet about. He duly accepted the challenge and the date was set.

It was a scorcher of a day in Calcutta as I opened the bowling, with little success at first. Indeed, I was tonked all over the park and the Indian National Congress XI were 190-3 before lunch when Gandhi came out to bat. Having changed ends, I started to hit the straps and fortunately with my fourth ball to Mahatma, I also hit the prominent ridge situated just short of a length at the Pavillion End. The great pacifist fended off a rising delivery and it looped into the hands of a grateful Lord Hawke at cover point. The game swung our way and an irate Gandhi returned to the hutch without bothering the scorers five minutes ahead of the tea interval – not a happy bunny. 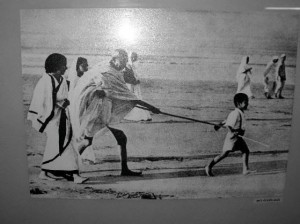 Gandhi - Hopeless against the short-pitched delivery

Now it’s not right to speak ill of one of the most influential civil rights campaigners in history, but as a middle order batsman he was dreadful. He was angry with me for my controversial selection of Kumar Shri Ranjitsinhji for ‘The Empire And Any Talented Subjects XI’, but it was his own selection that I tackled him on at tea.

Having pointed out his woeful shortcomings (he insisted on wearing the glasses, yet he didn’t even wear spikes!), he stormed out and refused to eat with us. In fact, he refused to eat for some time after that, although I might be confusing that with another period in his life.

Anyway, what I’m saying is that sport shouldn’t create barriers between people. The Calcutta match for example had a happy outcome. We kept India until 1947 thanks to my impeccable figures of 27-8-74-5 and Ranjit’s stunning 232 not out. 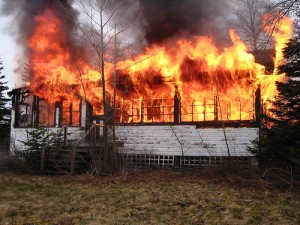 Passions ran a little too high at the staff hostel

Today, a tight finish saw Pakistan lose in Mohali by 29 runs to progress to the World Cup Final.

At West Ilsley though, the Indian residents’ celebrations were somewhat short lived.